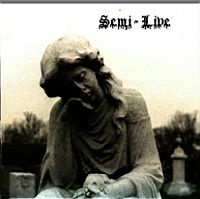 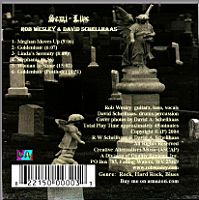 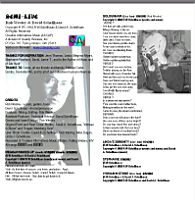 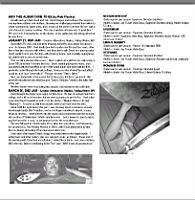 Description: The first in the series of the Semi-Live cd's, the songs were created during spontaneous jam-sessions with David Schellhaas on drums/percussion, and Rob Wesley on guitar. The individual sessions were later shaped and augmented in the studio, with the addition of vocal and other instrument tracks by Rob Wesley (lyrics/vocals, bass, guitars etc.) The songs on this cd were primarily from the jam-session of March 26, 2002, with one track from the jam-session of January 21, 2001. The live sessions were captured on 4-track tape, ported to digital, and the augmented tracks were added in the digital studio.

HOW THIS ALBUM CAME TO BE (by Rob Wesley):


As with each jam that David and I do, David shapes and reshapes the songs by varying drum patterns and rhythms, throwing me challenging material from which to create spontaneous guitar parts, and I in turn do the same in reverse for him, with a sort of musical synergy evolving. The only expected outcome was "a good time."


David (then 18 years old) had been teaching himself to play drums for about a year. In January 2001, I had hardly touched a guitar over the past ten years, other than a few jam sessions with others, and three times with David also playing guitar. David wanted me to jam, this time with David on drums, and so totally unprepared, we started with no preconceived ideas.
First, we did a standard blues jam.. Next, I pulled out a gift from my wife Linda, a Zoom 505 pedal that I'd hardly tried out. David started playing the drums, and I just started with the first effect in one of the pedal banks and went with the flow. I gradually cycled through the bank settings, having no idea of what the next effect would be, and I just "went with it." That jam became "Starry Starry."
Next, we started with a fast-paced A-D-E blues jam, but then I got bored. We gradually transitioned into what became "Linda's Serenity," which is the latter half of this jam.
We then did two more cuts during this session, not included in this collection.


David brought his drums once again, for two days. He was on spring break from college, and a bit out of practice, but we were just going to jam for fun. I had a few song ideas that I'd wanted to work on in the studio-"Meghan Moves Up" and "Stephanie". I'd come up with them months before but hadn't had the time.
About 3AM the night before this jam, I was showing David a nameless acoustic dreadnaught guitar that I'd gotten, and as my fingers mindlessly played, a song began to develop. I went directly into the studio and cut what became the acoustic intro portion of "Goldenhair," totally spontaneously. Lyrics began to come to mind, and the format for a song, so we jammed on this the next afternoon.
This was followed by run-throughs of my other two song ideas, and followed by the spontaneous, free-flowing Woman In Stone, with David (rather tired by that time on drums) still pulling off an impressive drum solo.
I took each of the taped 2-track songs and ported them to the digital studio. I added bass and other guitars, plus any relevant vocals, as follows. It was sort of like jamming with David and myself when I added these tracks, and some mistakes left in the mix, further contributing to the "live" aura. Well- it was all spontaneous!