In memory of
Bette Smiley Schellhaas and Wes Schellhaas 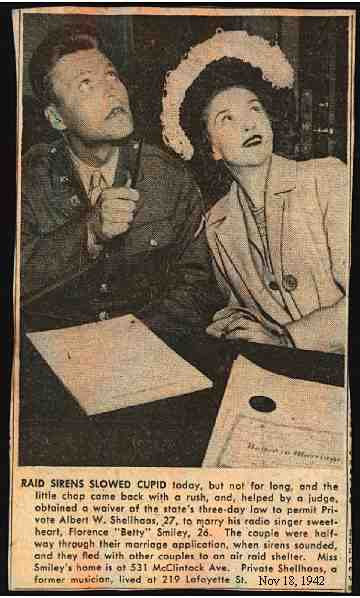 Bette Smiley (1916-1995) was a singer and pianist from Parker, Pennsylvania. After high school she went to Pittsburgh to attend University of Pittsburgh. One day she was looking through the job-ads in the newspaper and, on a dare from her roommates, applied for a job as a disc-jockey on radio station KQV Pittsburgh. She was hired. Thus began a twenty- year history in radio work, mainly on stations in Pittsburgh to include KDKA, KQV, WWSW, WCAE and WTAE, as well as WKAT in Miami during WW2 and as a one-year trade at WJR in Detroit. Her popular show, "Radio Gift Shop of the Air" was syndicated on the Mutual Broadcasting Network and featured Bette's interviews with top-name entertainers, reading poetry, singing and playing piano live with a studio band, and reading heartfelt letters from listeners who then received a gift from one of the show's sponsors. She also was the featured vocalist with many dance bands such as Rusty Williams Orchestra, Tommy Carlin and Bernie Armstrong Orchestra, and for a brief while Fred Waring and the Pennsylvanians. The latter experience was short-lived as she didn't want to relocate permanently to their home-base in New York City, and decided that it was time to settle down and raise her new son and to teach private piano lessons. Not long afterwards, however, the expansion of television brought a new opportunity for her, and the newly-founded NBC Pittsburgh station WIIC Channel 11 (now WPIX) asked her to host a noonday television talk and variety show. However, after considering it, along with all the long hours it would require, she declined. She continued to teach piano until six months prior to her death at age 79. She was a member of the Piano Teachers Guild, and participated actively in presenting select students, and occasionally in judging recitals locally, including LaRoche College. She passed away August 17, 1995.

Wes Schellhaas (1915-1996) was a trumpeter and arranger from Perrysville, Pennsylvania, near Pittsburgh. He played with a variety of local bands through high school and afterwards, in the Pittsburgh area, and was well-noted as a trumpet player, ever since having played in the All-City High School Band. He had various local bands of his own, and then began playing with larger, much more well-established touring bands. He had become good friends with famed bandleader Tommy Dorsey, and at one point Wes traveled to New York City at the invitation of Tommy, and stayed at his house for about a week, while practicing with the band. The plan was for Wes to join the Tommy Dorsey Band. However, the local musicians' union required New York City residency in order to obtain standing, and Wes chose not to make the permanent move. In December, 1938 Lawrence Welk was on the rise with his orchestra, still a lesser-known touring band, and they arrived in Pittsburgh, Pennsylvania where they had gotten a contract to play at the William Penn Hotel, opening on New Years Eve, 1938. Their shows were broadcast on radio station WCAE. The band traveled only with a core-band, augmenting with local musicians in each city. In Pittsburgh, Wes Schellhaas was selected as the trumpet player. It was during this brief three-week series of radio broadcasts that announcer Phil David noted that Lawrence Welk's band had a rather light, bubbly sound, and he made a popping sound with his mouth and finger, and dubbed it "Champagne Music." He also used a bubble-making fan to blow bubbles across the dance-floor as the band was introduced. These effects quickly became the band's trademark. Several years later, realizing financial demands and the irregular income of being a musician, Wes joined the Civilian Conservation Corps (CCC) as a morse-code communications relay specialist and bugler. He then enlisted with the Army as a communications specialist as World War II broke out. When an opening became available he was transferred to the new Army Air Corps as a musician and played trumpet with the 17th and 18th Army Air Corps Bands at the Officers' Candidate School in Miami Beach, Florida (one of the more famous persons to pass through this school around this same time was actor "Major" Clark Gable). While stationed there he married Bette Smiley who then relocated to Miami to work at WKAT radio. After the War the couple relocated back to Pittsburgh where Wes continued to play with local Pittsburgh bands. He later became Band Instruments director at Volkwein Brothers Music in Pittsburgh, as well as a private trumpet teacher. He passed away September 6, 1996.

Wes is 5th-back in the left row, just in front of the first drummer.